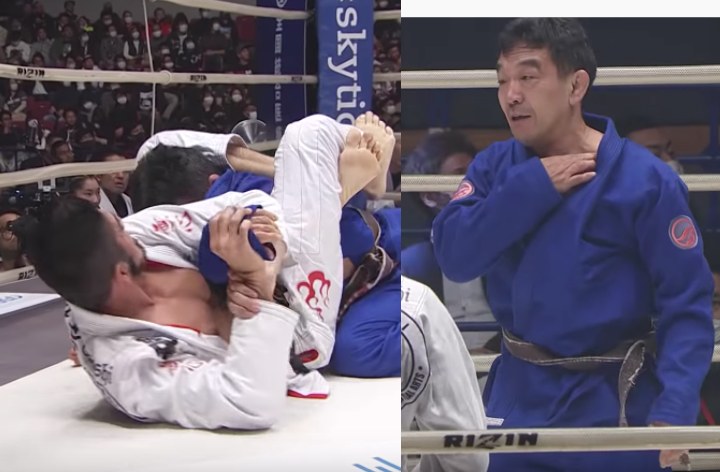 Brazilian-Japanese black belt Roberto Satoshi Souza is one of the best lightweights in the world having medalled at the highest level at black belt (Worlds, World Pro, Pan and Europeans).

He runs the Bonzai Academy in Japan with his brother Marcos.

Satoshi recently had an interesting challenge. He faced 5 members of Team Nakai (Paraestra) during a recent Rizin MMA event. Team Nakai was led by BJJ and MMA legend Yuki Nakai, the first Japanese born BJJ black belt and who also has a Kosen Judo background. Nakai is also famous for having fought and lost to Rickson Gracie at Japan Vale Tudo in 1995.

Satoshi faced a varied team which was comprised of a female juvenile orange belt, a white belt who is also a famous comedian, a purple belt, black belt Edison Kagohara and at the end Yuki Nakai.

Satoshi went through each opponent, submitting them one by one and at the end faced Nakai.

It was a technical match where the 50+ year old Nakai showed his skill. Satoshi ended catching Nakai in a triangle but the veteran defended well and Satoshi switched to a Kimura and there both of them heard a loud pop as Nakai’s shoulder dislocated. Nakai just laughed it off and told Satoshi to put the arm towards the leg… Nakai ended up tapping to the choke and with a smile readjusted his injured shoulder. You could see that he was in pain but he waved it off.

Nakai is set to face Marcos Barbosa in a superfight next month. This injury could compromise that match.

Check out the match: