BJJ black belt Joe Rogan, on his last podcast was talking to his guest Owen Smith, about the effectiveness of Jiu-Jitsu. He used a famous analogy from Relson Gracie:

He wanted to show him how effective it really was so he talked about his black belt teammate Felicia Oh, a female BJJ black belt under Jean Jacques Machado.

Felicia was challenged to a roll by adult film Seymore Butts a few years ago. Butts who goes his real name Adam Glasser, was a very fit guy and he trained for some years at Jean Jaques Machado and Eddie Bravo.

According to a thread on sherdog, Butts trains/ has trained at 10th planet Jiu-Jitsu under Eddie Bravo:

Seymore Butts aka. Adam Glasser has his own reality tv show now (who doesn’t?) called Family Business. Anyways I was watching the other night & he was writing a scr.ipt for his next film, yea they actually have scripts, anyways he says he’s having writers block so he “needed to go to the gym to get stretched”. I was shocked to hear that as being stretched is a submission grappling term.

Imagine my shock when the camera’s followed him to Eddie Bravo’s West Hollywood, California’s 10th Planet Jiu-Jitsu! And Eddie was there too, instructing Glasser (aka. Seymore). Bravo had Glasser roll with a some average looking chick and the chick tapped him out twice, RNC both times, LOL

They also interviewed Bravo and he came across really cool & laid back. I just thought I’d share. 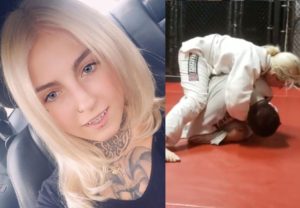 Check out the story from Rogan: